IT CAN BE DONE – NGO FUND

The NGO Fund was aimed at fostering the development of a civil society, to promote social justice, democracy and sustainable development. The fund was part of the EEA Financial Mechanism 2009 – 2014, in which the donor countries Iceland, Liechtenstein and Norway contribute to reducing economic and social disparities in the European Economic Area. Considerable attention was paid to the development of bilateral relations between the donor countries and Slovakia. The financial contribution amounted to € 7.4 million.

The Fund was implemented through two programmes: Active citizenship and inclusion, which was managed by the Ekopolis Foundation, in partnership with the Foundation for Children of Slovakia and Socia – Social Reform Foundation and Democracy and human rights administered by the Open Society Foundation.

This publication brings basic facts on individual projects of NGOs, activities, they realised and outcomes the NGOs achieved. The Block Grant was strategically aimed at increasing the capacity of environmental NGOs to effectively participate in public discussions, propose and implement innovative solutions to environmental issues and their solving as well as creating functional partnerships with organizations
from other sectors. In three calls for proposals (2008 – 2009), the Ekopolis Foundation supported 34 projects with the total sum of 2.379 million EUR in the areas of support: Protection of the environment, Support of Energy Efficiency and use of Renewable Energy Sources, Support of Food Safety, Environmental Education. 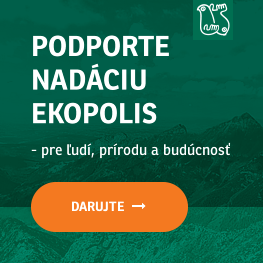